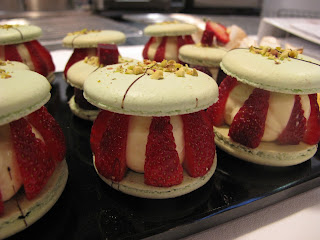 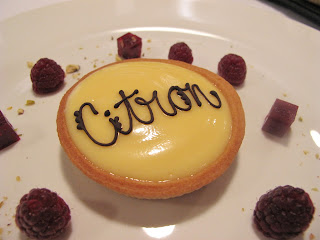 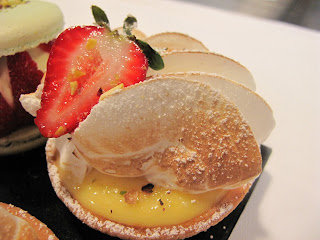 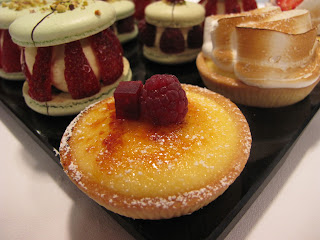 Chef's Macaron À La Pistache Et Diplomate Au Citron Et Fraises & Tarte Au Citron
We continue the week's individual desserts theme with pistachio macarons and lemon tarts, the former a fancier version of the macarons made in Intermediate Patisserie, and the latter a must-have in any self-respecting patisserie from Paris to Sydney. 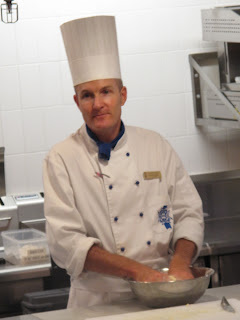 Head Chef Andre Making Pâte Sablée
Chef Andre gives me the jitters whenever he's in the vicinity: I'm either in trouble or about to be when head honchos/disciplinarians are around. ("What have you done now?" sighs Chef Gert once, when I was called up by Chef Andre for not labeling my mise en place correctly. Yes I have been responsible for various classes of misdemeanors back in the day.)
That's not to say he's the scary brute and bully some chefs are prone to be. Instead he was an extremely informative instructor, patiently explaining the hows and whys behind a good product. When I did stuff up in the kitchen (more on that later) instead of ripping up his chef's jacket in green rage, he repeated the process with me, explaining where I went wrong and how to fix it. I like him. I respect him. But the delinquent in me still fears him and I have to stop myself from making haste in the other direction whenever he's in sight. 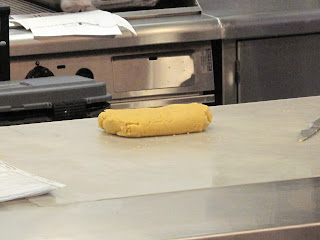 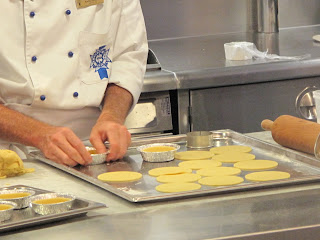 From Dough To Tartlet Moulds
Pâte Sablée is a "short" sweet paste pastry similar to the one used in Pear Bourdaloue (one of my Top 10 fav desserts). As the butter is rubbed into the flour, it shortens the protein strands, preventing gluten from forming and ensuring a crisp, crumbly tart when baked. 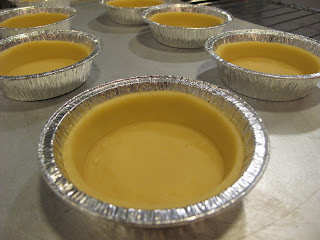 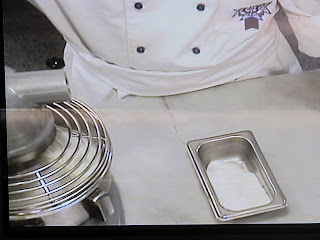 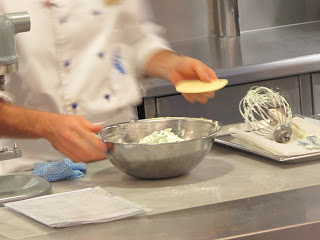 Mixing French Meringue For Macaron, Massaging Down Meringue Mix
Some experts believe Italian meringue makes the best macarons, which may be the case, but today's French meringue is easier to make and when it comes to macarons, it's as much about the technique as it is the ingredients.
Into the meringue goes TPT (Tant Pour Tant: equal amounts of icing sugar and almond meal) and pistachio paste conditioned with some egg whites for a more even incorporation. Here's where it gets interesting: the macaron mix, with the aeration so carefully built up in the meringue, is slowly "massaged" down in a folding-over action, until the mixture is soft, loosened and of piping consistency. 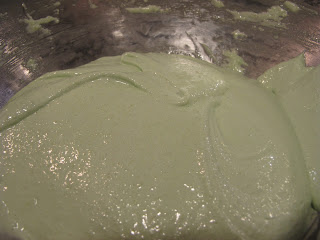 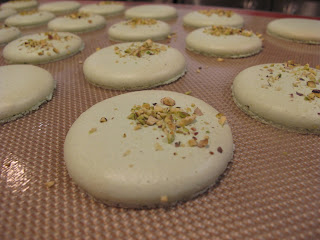 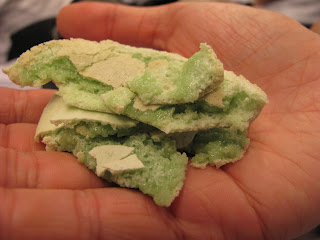 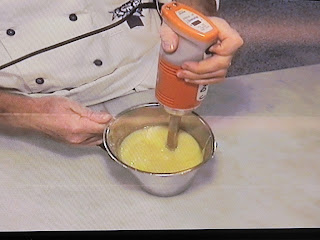 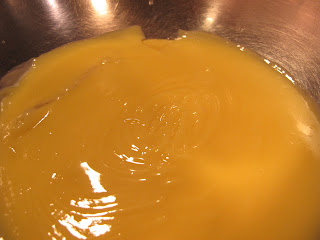 Bar-Mixing Lemon Curd
First made in the 19th century, the very English lemon curd was traditionally served with scones or as an alternative filling to jam in cakes and tarts. This thick, velvety cream is more sour than sweet, so for those of youse who like your lemons, pucker up!
Lemon juice, zest, sugar and eggs are brought to a boil (stirring vigorously to prevent the eggs from scrambling), then butter is thoroughly incorporated with the aid of a hand held mix (so sexy, these gadgets), whizzing at the bottom of the holding vessel to prevent bubbles from forming. The curd is now ready for use. 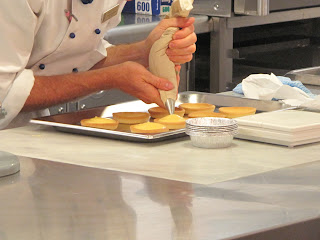 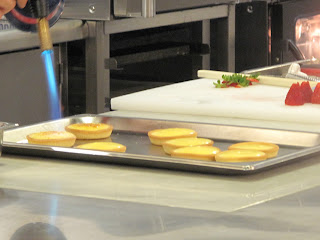 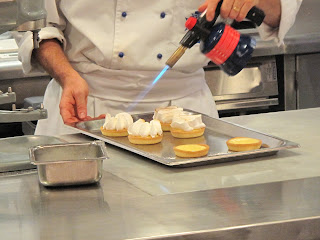 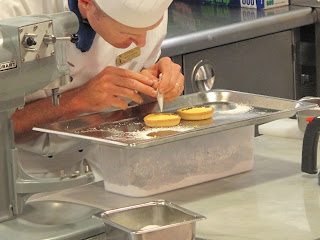 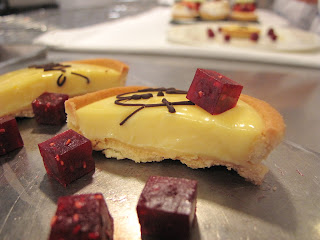 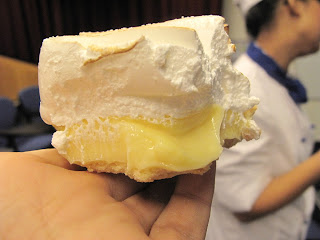 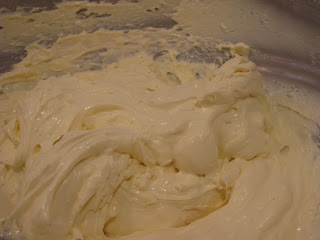 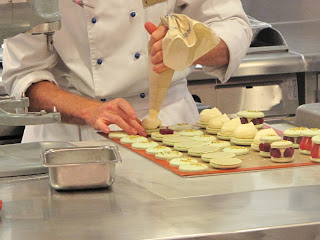 Piping Macaron With Diplomate Au Criton & A "Surprise" Jelly Center
Like in previous classes, gelatin and whipped cream are mixed into the lemon curd to make creme diplomat, a more stable filling that will keep its shape and hold up the macaron "top" when piped in the center. 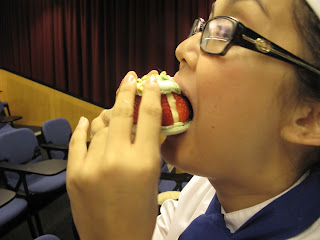 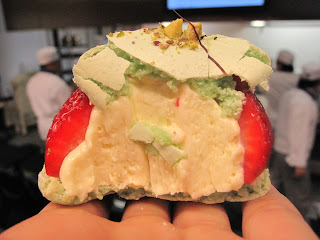 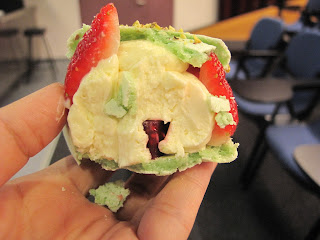 Macaron Dissected: Full Of Flavors & Surprises
I *heart* pistachio anything man, well, except the nut itself. I'm a sucker for its funky green hue and almondy flavor and fragrance, if you do not know by now. The light lemony creme and fresh berries were a perfect match in color, texture and flavor to the macarons, which made them a real delight to recreate in the kitchen today. 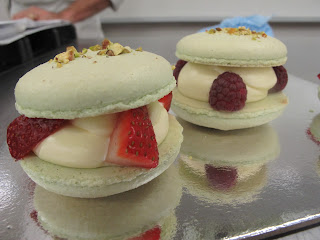 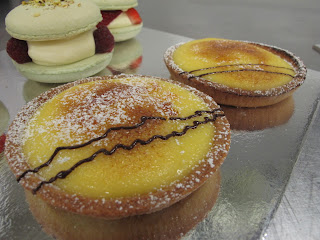 My Dainty French Bites
I'm quite pleased with my macarons, Chef Andre commended the smooth surface, nice foot and bright green hue of my lovely babies (they brown very easily if baked a minute over).
Remember the screw up I mentioned earlier? In the process of cooking curd I made lemony scrambled eggs instead, which Chef Andre helped me rectify by sieving out the cooked egg bits and replacing the lost volume with fresh eggs before carefully cooking it through again. 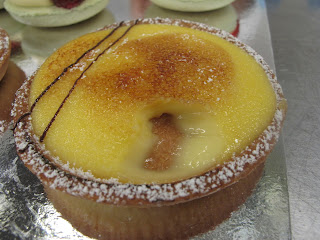 Stamped (Or Spooned) For Approval
My twice-cooked curd was tried and tested by Chef Andre, who found it satisfactory. In fact, the lemony zing was less intense (which I prefer) and the curd had a more well balanced flavor overall. Hmm, maybe that's the key to really good curd, no?
Posted by Little Chef