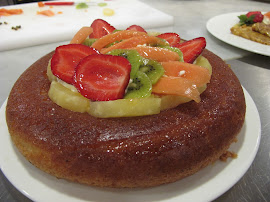 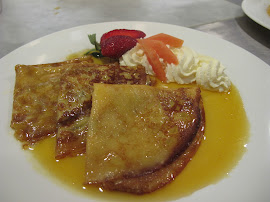 Chef's Savarin Aux Fruits & Crepes Suzette
Savarin, or Rum Baba, is a traditional Polish yeast cake which the French modernized in the 19th century with the addition of rum. And in keeping with tradition, they named it after after one of the world's first and and foremost gastronomes, Brillat-Savarin.
Crepe Suzettes, on the other hand, is the result of a fortunate mishap when a young waiter accidentally set fire to an order of the popular french crepe. It was no ordinary order, mind you, but that of Prince Edward VII of England. Loving the booze, the young prince spared the waiter's neck and in his God given rights as royalty thus named the dish Crepe Suzette. 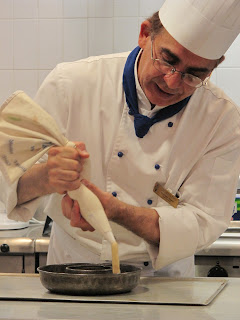 Chef Michael Piping Into Savarin Mould
Chef Michael taught demo today; informative and patient, he shared generously from his vast experience tips and tricks of the trade, always with a sense of humor and a smile on his face. 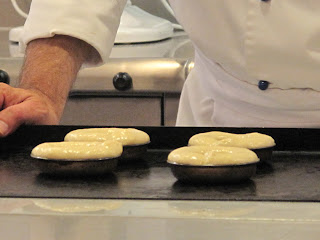 Savarin After Proving
With yeast as the leavening agent, the dough was left to prove till not double in size, but 3/4 increase in volume, to allow for oven spring, i.e. further expansion in the oven. This is a common misstep of many a home baker; over-proving stretches the gluten in the dough to the point it loses its elasticity that results in a tough crumb when baked. 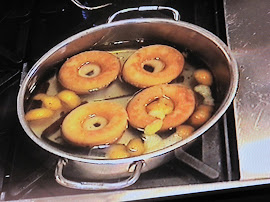 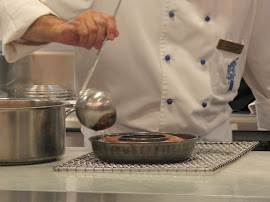 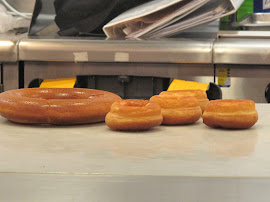 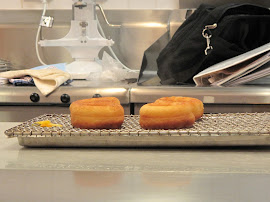 Pre & Post Dunk
The baked savarins, still warm, are left to soak in an orange and spice syrup bath and this time, to double in size as the porous crumb drink up the liquid like a thirsty alcoholic sponge. 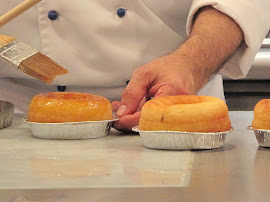 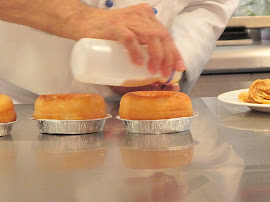 Finishing Touches: A Shiny Coat Of Apricot Jam & A Splash Of Rum 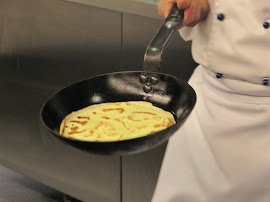 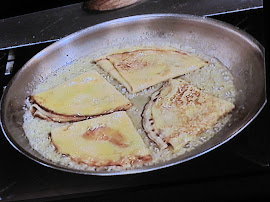 Flipping Crepes, Cooking In The Golden Liquor
I love crepes. Being thinner than pancakes just means I can eat more of them, and that is always a good thing. The crepe batter is thinned down with milk, to make it easier to pour into and spread around a lightly greased pan. Then a straight-forward sauce of butter, sugar and OJ is caramelized and the crepes thrown back in for a good soak. 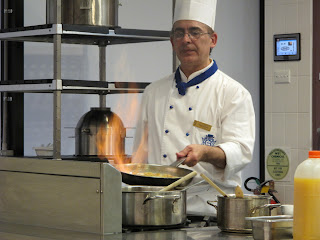 Watch Those Eyebrows!
Finally, the mistake that, according to the young waiter "...would reform a cannibal into a civilized gentleman", Grand Marnier is added to the pan and ignited in a blazing glory. More than mere showmanship, this cooks out the strong alcohol and softens the flavor which marries the water, sugar and alcohol together for a smoother finish. 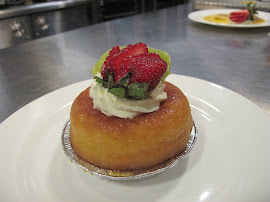 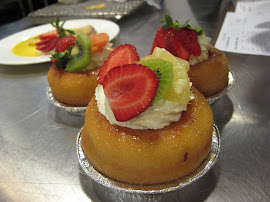 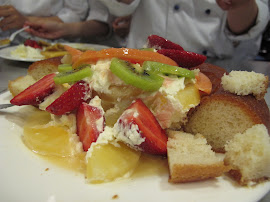 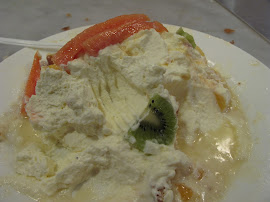 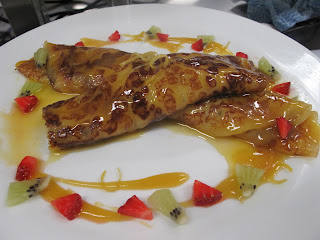 My Crepe Cigars
The genius that I am decided that 1 recipe of 4 anorexic pancakes wouldn't be enough to feed me, my Mum, cousin and Simon, so I made not 2, not 4, but 8 times the recipe!
So 2 hours into class, I was still slaving over the stove, flipping them flippin' crepes, watching the world go by... Chef Michael and Chef Keith would stop for a visit every 1/2 hour or so, each time inquiring about the large family I was apparently trying to feed. O_o 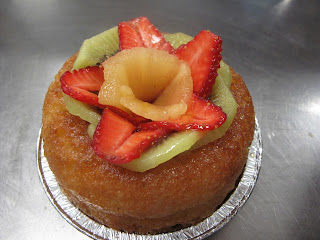 Plain Jane
With most of my youth spent cooking the crepes, I was left with just enough time to quickly and pathetically garnish my baby savarin, no whipped cream, no fuss, no flourish. 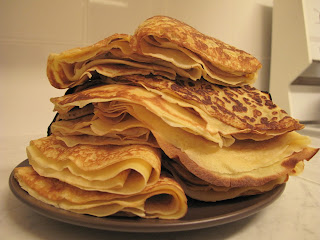 The Motherload
In the words of the great Brillat-Savarin:
"Those persons who suffer from indigestion, or who become drunk, are utterly ignorant of the true principles of eating and drinking."
But stuff that.
"The pleasure of the table belongs to all ages, to all conditions, to all countries, and to all aeras; it mingles with all other pleasures, and remains at last to console us for their departure."
Posted by Little Chef